UPDATE 111212: NTI just announced its first prorated 3Q12 distribution of $1.48 per unit, substantially outperforming the estimates from the IPO Prospectus. The Variable Distribution policy MLPs are great on the way up. We are currently in the “I’m a Genius!!” phase shown in the CLMT chart below.

Apologies for not pulling a real review of this one together back when it was pricing on July 25th but here’s my current 2 cents on NTI:

NTI was on its roadshow looking to price in the $19 – $21 range, but on the night of pricing it got pushed down to $14. Subsequent to NTI going public I saw various information about the placement of the units and estimates were that around 70% of the NTI IPO was placed institutionally. So, higher than expected for an MLP (versus expectations that more would be placed in Individual Investor hands, aka Price Takers, although that trend is definitely going the other way as there are more ETFs, ETNs, mutual funds etc. specifically focused on MLPs). On the night of the NTI pricing it was like Christmas as a kid for me, I kept waking up all night checking the clock and got up really early in anticipation of the start of trading of NTI. My personal belief is that those institutions that invest in the specialized area of energy MLPs and who had also been invested in the recent PDH IPO were irritated with PDH’s performance (the most recent VARIABLE rate MLP) and sitting on unrealized losses (just like I am) and thus pushed down the IPO price of NTI by scaling their bids down and putting in larger and larger orders at lower and lower prices (eventually causing the IPO to clear at $14, big thanks to those Institutions!). These Institutions, aka Price Makers, set the pricing for IPO’s so their general mindset is extremely important while an IPO roadshow is going on and the more of an MLP IPO that has to get placed with them (that’s a general sign of lack of receptiveness from the traditional Individual Investors/Price Takers) the more likely those Institutions/Price Makers are to want to get a better deal.

I’m long NTI and now of course it continues to run up making me wish I had a larger position, such is life, but NTI is EXTREMELY RISKY, it has a single refining asset (these are always, always trying to blow up) so its cash flow is exposed to the very volatile crack spread and it has a VARIABLE distribution policy with no stated Minimum Quarterly Distribution. It does have some hedging in place but a much lower percentage than say the Upstream MLPs. If you are long NTI you are long while crack spreads for its refinery are at very, very favorable levels, this cannot and will not last forever so be prepared to SELL when their crack spread turns or be prepared for signficant drops in distributions and the unit price. Calumet Specialty Products Partners (CLMT) is the closest MLP peer to NTI by business and they had a great run from their IPO into the back half of 2007 but then things turned and eventually they had to drop their distribution from $0.63 down to $0.45 for the first quarter of 2008 ($0.45 is their stated Minimum Quarterly Distribution). Here’s what happened to CLMT’s unit price: 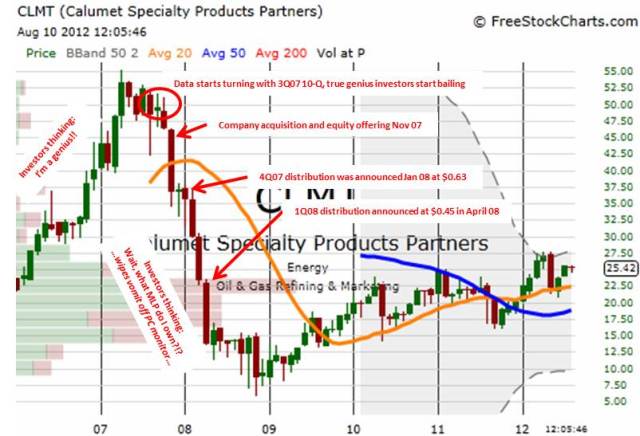 With all of that in mind, you can find all the good things about NTI in the roadshow slides here (see slide 7): NTI Roadshow

Also Hi-Crush Partners LP is now out on the road looking to price its IPO next Wednesday night (8/15/12, Roadshow video). This is another stretching of the MLP universe as HCLP produces “premium monocrystalline sand, a specialized mineral that is used as a “proppant” to enhance the recovery rates of hydrocarbons from oil and natural gas wells,” i.e sand that is used by oilfield service companies for hydraulic well fracturing, so as always it will be really interesting to see how it goes…