What do you think CVR Partners will announce as their distribution for the fourth quarter of 2012?

From their January 9th Press Release:

The company reaffirms its expectation for 2012 full year distributable cash flow in the range of $1.70 to $1.80 per common unit.

So we have guidance for the full year, how much have they distributed for the first nine months?

Most sources that show a “Dividend Yield” for UAN are showing it around 7.5%, which is based on the sum of UAN’s last four distributions (which total $2.207). Keep in mind that UAN is a Variable Rate MLP so its distributions will go up and down based on each quarter’s distributable cash flow.

You now have an estimated range for the fourth quarter distribution, what do you think current holders of UAN units will do once they announce the distribution?  Especially all people who have bought units since the start of 2013? Is a lower distribution priced in to the unit price? 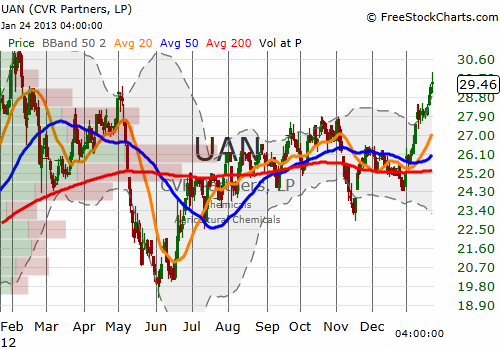 Guess we’ll see once they announce it…

UPDATE 1/24 4:17PM: UAN just announced a distribution of $0.192 for the fourth quarter, so they can say they “exceeded guidance,” market reaction TBD tomorrow morning.

UPDATE 1/29: I sold one tranche of UAN puts today for a 102% gain because it seems like most of the surprised sellers exited in yesterday’s high volume. And sold the second tranche for a gain of 75%.

President of MLP Protocol, investor, trader, and proponent of Master Limited Partnerships.
View all posts by Philip Trinder →
This entry was posted in Other. Bookmark the permalink.