There are four publicly traded MLPs that own refining assets: ALDW, CLMT, CVRR and NTI. In my analytics I currently have the Variable Rate Refining MLPs ALDW, CVRR and NTI categorized as “Extremely Risky” and CLMT as “Very Risky” and today was an example of exactly what risk looks like.

The proposed Tier 3 program is a comprehensive approach, considering the vehicle and its fuel as an integrated system, aimed at addressing the impacts of motor vehicles on air quality and public health. The program proposes to set new vehicle emissions standards and lower the sulfur content of gasoline beginning in 2017.

The proposed Tier 3 gasoline sulfur standards are similar to levels already being achieved in California, Europe, Japan, South Korea, and several other countries.

The proposal will mean that refineries will need to lower the sulfur content in produced fuels from 30 parts per million (ppm) down to 10 ppm, beginning in 2017. The “news” about the EPA proposal started to get picked up today and at 1:35PM Eastern an article hit the on line Wall Street Journal quoting Valero (VLO):

Valero spokesman Bill Day said Tuesday that the company expects to spend $300 million to $400 million building new equipment to remove sulfur from gasoline and to expand existing facilities. He said Valero expects to incur additional operating costs each year, and those costs have yet to be determined.

The EPA’s view in the same WSJ article:

The Environmental Protection Agency said most refineries would be able to comply with its plan to reduce the amount of sulfur in gasoline with little to no effort.

I think anything that includes “EPA proposal” and “refinery” in the same sentence triggers a Pavlovian response to start selling (especially after the recent strong upwards price move). The price weakness then tends to become self-reinforcing. Here’s how the refining MLPs traded today (note that volume appears to increase as prices continue to decrease after the WSJ article came out): 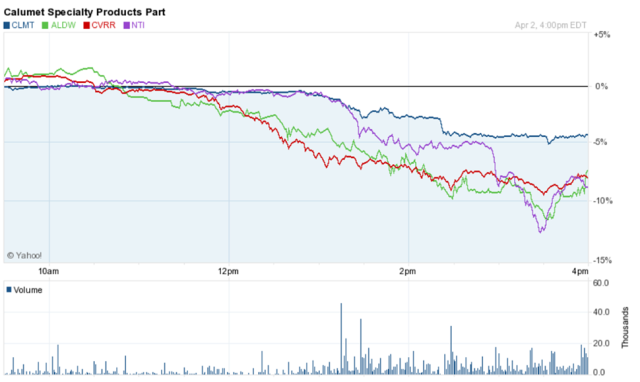 Have the MLPs Mentioned Anything Regarding Possible Tier 3 Costs?

As another example, the EPA proposed new “Tier 3” motor vehicle emission and fuel standards in 2012 which may result in further restrictions on the permissible levels of sulfur in gasoline. We are not able to predict the impact of new or changed laws or regulations or changes in the ways that such laws or regulations are administered, interpreted or enforced but we may incur increased operating costs and capital expenditures to comply, which could be material. To the extent that the costs associated with meeting any of these requirements are substantial and not adequately provided for, our results of operations and cash flows could suffer.

Tier III. The EPA is expected to propose “Tier 3” gasoline sulfur standards in 2013. If the EPA were to propose a standard at the level recently being discussed in the pre-proposal phase by the EPA, [CVRR] will need to make modifications to its equipment in order to meet the anticipated new standard. If the Tier 3 regulations are eventually implemented and lower the maximum allowable content of sulfur or other constituents in fuels that we produce, we may at some point in the future be required to make significant capital expenditures and/or incur materially increased operating costs to comply with the new standards. It is not anticipated that the Wynnewood refinery will require additional capital to meet the anticipated new standard. We believe that costs associated with the EPA’s proposed Tier 3 rule will not be material.

For example, the EPA has announced that it plans to propose new “Tier 3” motor vehicle emission and fuel standards sometime in 2013. It has been reported that these new Tier 3 regulations may, among other things, lower the maximum average sulfur content of gasoline from 30 parts per million to 10 parts per million. If the Tier 3 regulations are eventually implemented and lower the maximum allowable content of sulfur or other constituents in fuels that we produce, we may at some point in the future be required to make significant capital expenditures and/or incur materially increased operating costs to comply with the new standards.

So generally the MLPs have mentioned proposed Tier 3 standards as a risk and only CVRR has mentioned that they don’t think it will be a material cost to them. CLMT didn’t specifically mention Tier 3 in its most recent prospectus.

Valero already has 2 refineries in California that can meet the Tier 3 standard, so that would leave 11 other refineries in the U.S. that would need to spend money to upgrade. Since Valero has refineries that can produce fuels at 10 ppm of sulfur, we’ll view them as an expert. 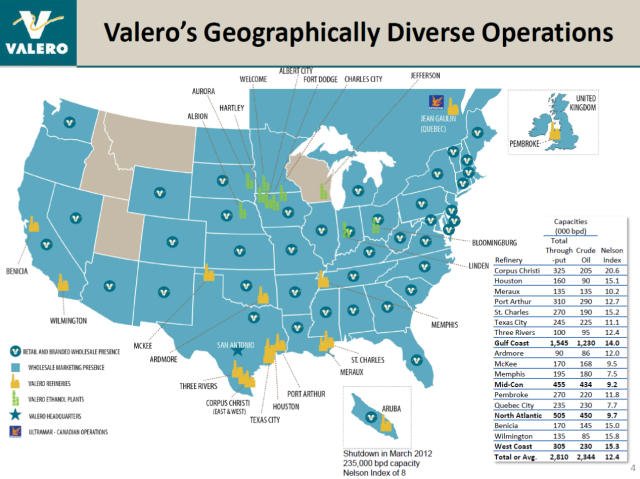 Using Valero’s high ballpark cost estimate of $400 million and allocating it based on refinery throughput capacity, results in the following very rough estimates for the refining MLPs:

There are 16 quarters of performance between now and when the refiners would need to be Tier 3 compliant. Yes, current crack spreads are abnormally strong so they will weaken between now and then, but the rough estimate of possible capital expenditure costs just doesn’t seem worth panicking about compared to 4 years of cashflow between now and the start of 2017.

UPDATE 040313: CVRR put out a Press Release this morning stating that they would need to spend a total of approximately $20 million to meet the Tier 3 standards. The full amount of this upgrade was reserved as cash on their balance sheet at the close of their IPO.

UPDATE 2: Just noticed the NTI just put out a Press Release about Tier 3: Management’s current assessment is that the proposed updated standard will not have a material financial impact to the Company.  Preliminary engineering assessments predict that no capital spending will be required to comply with the new standards.

UPDATE3 040813: ALDW put out a Press Release this morning commenting on the Tier 3 standards.  ALDW will incur less than $10 million in capital expenditures to upgrade its refinery and operating cost increases are not expected to be material to the partnership’s performance.