Posted on September 9, 2013 by Philip Trinder 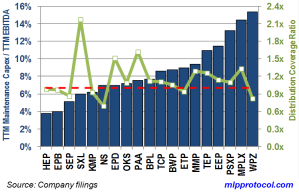 The chart also shows the Distribution Coverage Ratios (DCRs) for the group based on either the trailing twelve month number (calculated using actual distributions paid in the period as per the filings, versus using the most recently declared distributions) or the most recent quarterly DCR if that ratio is less than 1.0x (again using actual cash distributions paid in the period as per the 10-Q). In a general sense, a DCR below 1.0x is potentially cause for concern (the dotted red line in the chart is at DCR 1.0x).

I have seen some recent conjecture that part of Hedgeye’s thesis on why Kinder Morgan et. al. is a “House of Cards” (really great headline writing with that tag line) might have something to do with their estimates of Maintenance Capex, so I put together the above chart to compare the peer group’s numbers. Yes, Kinder Morgan Energy Partners (KMP) and El Paso Pipeline Partners (EPB) are on the lower end of the peer group and both are below the peer group average of around 8.5% (which could be completely irrelevant if  Hedgeye contends that every single MLP has wildly understated maintenance capex, we’ll have to wait and see tomorrow).

The numerous MLPs shown all have different asset portfolios and various assets that are not long haul pipelines, like KMP’s oil production, so underlying assets drive some of the differences. In addition, some costs that make sense as “Maintenance Capex” can show up as operating expenses instead of capital costs. Every single GAAP set of financial statements include many, many management estimates, allocations and assumptions, that’s just how it works. The ongoing critical element is always how the market perceives the management and their financial statements and whether or not that perception changes over time.

I think it unwise to just dismiss analysis out of hand (especially before even seeing it) simply because the person is “only 26 years old” or “likes to fish.” I mean seriously, I find that comically irrelevant, were you any less intelligent when you were “only 26”? Was I? Was Einstein? I don’t think so. If you only seek out other viewpoints that agree with yours then you may be suffering from confirmation bias. Confirmation bias does not enhance your investment performance.

Rich Kinder purchased 500,000 KMI shares earlier today (large amount of money from my perspective but not that much from his perspective). The rest of the market’s response to the Hedgeye conference call and report tomorrow will be interesting…