I plan to track the total number of shares and units sold short across the four Kinder Morgan entities as an indicator of how much traction Hedgeye’s short thesis is achieving in the market place. The following chart shows the total number of units or shares sold short for each name over the last twelve months. The data is somewhat delayed and the data for September 13 was released late on September 24. 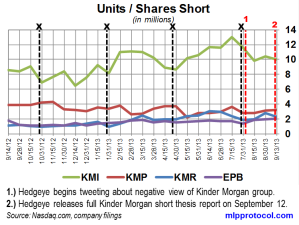 The vertical black dashed lines under the “X’s” mark the Ex-Dividend or Ex-Distribution dates for the entities. You may notice that some of the short positions tend to get covered prior to the Ex dates so they do not have to pay the dividends/distributions. Technically the data is as of the close on the date shown and not continuous data for every day, so the entire short position could be covered by the Ex date and then put back on the following day.

Here are the total values of the current short positions:

While all of those amounts are more than I have in my bank account, here’s how the short positions compare to the total outstanding market value of each entity:

The short positions are not yet substantial across the names and the only ones that seems to be showing a slightly increasing trend over the period shown are KMI and KMR. The Hedgeye report came out on September 12 so the short data for September 13 could not really have been impacted that much by the report. The key will be watching the trend going forwards.

There seems to be ongoing confusion about Hedgeye as far as whether or not they are a hedge fund or have any assets under management (“AUM”). Just so everyone who sees this post is on the same page, Hedgeye is a pure research shop and does not have any AUM. When they make a research call it is simply a recommendation, so this is why I am going to watch the actual short positions in the Kinder Morgan entities as a partial gauge of the “market force” of their recommendation. This is still only a very rough gauge because they have large institutional investors who are subscribers who may simply sell out of long positions and not actually initiate short positions. Large positions being sold still create downwards pressure on unit/stock prices.

I’ll post another set of updated charts after the short data for September 30 is released on October 9. You can find the data release schedule here.