Below please find an update on the total number of shares and units sold short across the four Kinder Morgan entities (as an indicator of how much traction Hedgeye’s short thesis is achieving in the market place). The following chart shows the total number of units or shares sold short for each name since September of 2012. The data is somewhat delayed and the data for October 31 was released two days ago. 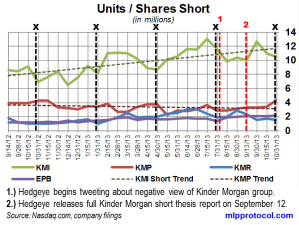 The vertical black dashed lines under the “X’s” mark the Ex-Dividend or Ex-Distribution dates for the entities. You may notice that some of the short positions tend to get covered prior to the Ex dates so they do not have to pay the dividends/distributions. Technically the data is as of the close on the date shown and not continuous data for every day, so the entire short position could be covered by the Ex date and then put back on the following day.

Here are the total values of the current short positions: 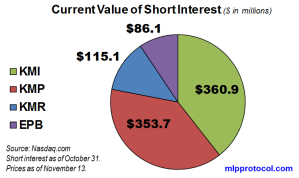 Here’s how the short positions compare to the total outstanding market value of each entity:

The short positions remain relatively small across the names and only KMI seems to be showing a clear increasing trend. KMI’s current short position in number of shares remains below the peak reached on July 15, 2013. The September 30 relative high was lower than the July 15 high so possibly a “lower high.” I will be watching for a “lower low” below the recent August 15 relative low as a possible indicator of a change in the trend.

Two week change in the amount of units/shares sold short: