Below please find an update on the total number of shares and units sold short across the three Atlas Energy entities (as an indicator of how much traction Hedgeye’s short thesis is achieving in the market place once the data includes periods after April 21, which is when Hedgeye began publicly discussing its negative view). The following chart shows the total number of units or shares sold short for each name since April of 2013. The data is somewhat delayed and the data for April 15 was released on April 25. 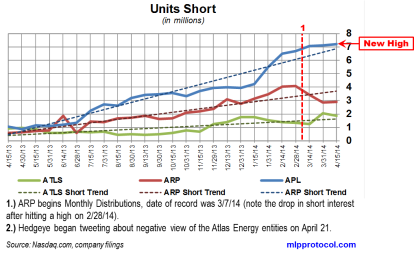 Two week change in the amount of units sold short: